Residents and neighbors say they don’t mind the dozen-block gauntlet of cameras set up by the Diego Beekman Mutual Housing Association in Mott Haven — unlike Brooklyn tenants who filed a complaint with the state.

In a first-story office on the ground floor of a Bronx apartment building, a round-the-clock security force stares at four large monitors, each subdivided into 36 boxes of live video feeds.

Covering a 12-block zone, the cameras capture images of sidewalks, residential lobbies and the entrances of local small businesses — and the identities of residents.

The cameras have facial recognition capabilities, one of the security monitor operators tells a visitor.

In contrast to Brooklyn tenants who filed a state complaint in 2019 protesting a proposed facial recognition security system their landlord ultimately withdrew, Diego Beekman residents interviewed by THE CITY said they welcomed the technology in a neighborhood grappling with chronic crime challenges.

A Powers Avenue resident, who asked not to be named, credited the technology and other interventions with making his neighborhood safer.

“It’s been community initiatives like this that have turned the neighborhood around,” he said in Spanish, showing his electronic key fob. “It was the cameras. They’ve had a lot of impact.”

Tenants took over ownership of the buildings that make up Diego Beekman in 2003, after the U.S. Department of Housing and Urban Development removed their landlord as crime and disrepair became rampant. Crack dealers plagued the area, leading one resident to tell the Daily News: “We had more drugs than the pharmacy and more guns than the precinct.”

Residents must submit headshots of themselves to the management office, and everyone over the age of 12 residing in their unit, in order to receive a key fob. 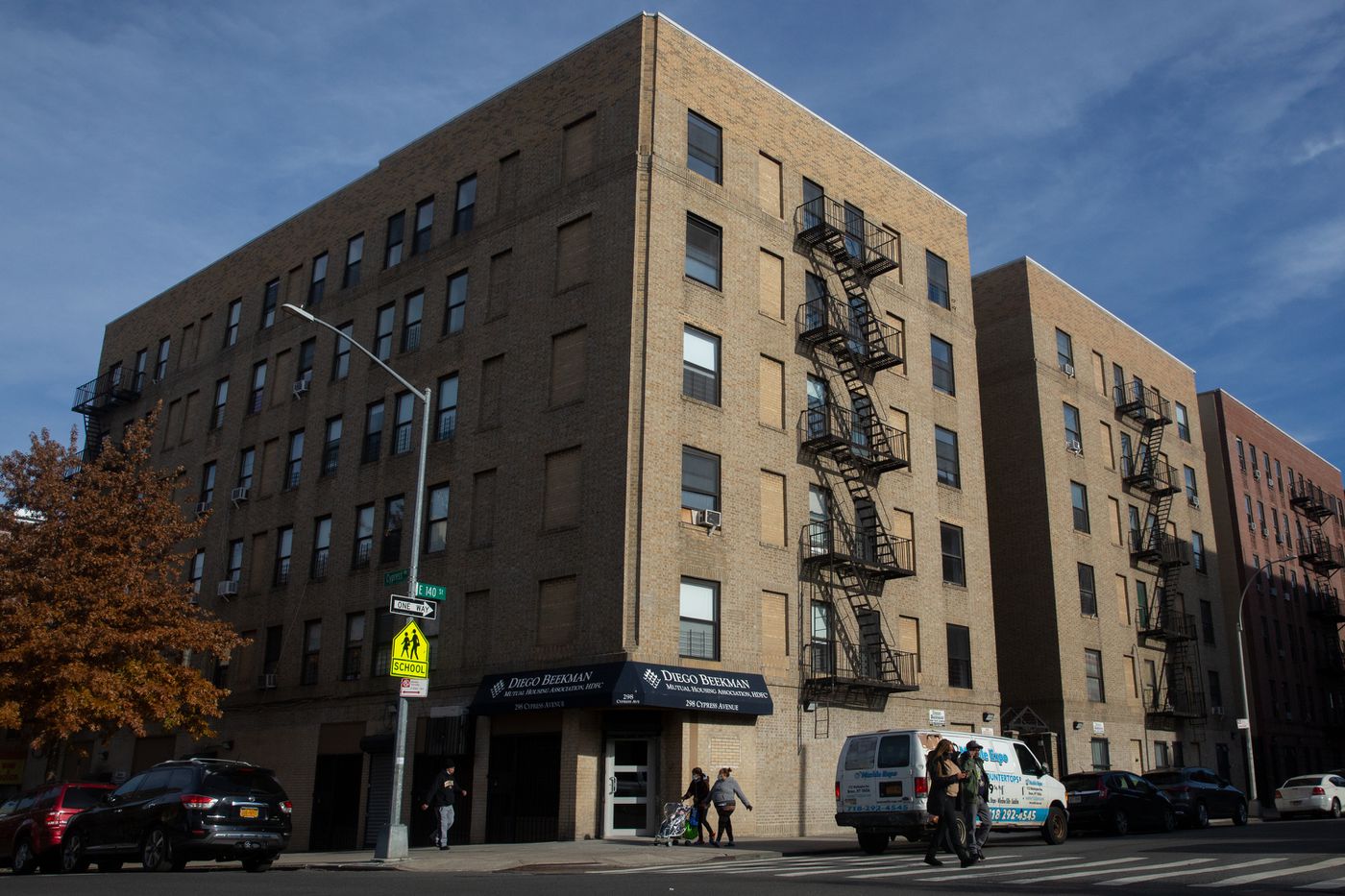 The cameras also capture images of scores of people passing through the neighborhood every day, including conventional video streams that Diego Beekman — like other property owners across the city — voluntarily shares with law enforcement to help with investigations.

In one incident, Diego Beekman’s cameras helped identify suspects in a shooting on 141st street and Beekman in August, Parks told THE CITY.

As Parks and a guard demonstrate the system to a visitor, they zoom in on a group of six men sitting at a card table on the sidewalk right before the shooting.

“Those guys were out on parole, right?” Parks asks. “Yeah,” the security guard says.

How could Parks assert that the men were out on parole? “We monitor everything,” she said.

‘Don’t Even Need a Warrant’

New Yorkers should expect a camera may be on them at any time when they’re outside their homes. A crowdsourced survey from Amnesty International released earlier this year counted 15,280 surveillance cameras on streets in Brooklyn, Manhattan and The Bronx.

Amnesty asserted that the NYPD applied “invasive and discriminatory facial recognition software” to footage as supplied by the cameras’ owners — noting that records obtained by the advocacy group Surveillance Technology Oversight Project identified more than 22,000 NYPD face searches in 2017 through 2019.

He noted that federal agencies, including Immigration Customs and Enforcement, can subpoena the footage.

“Most of the time police don’t even need a warrant because the landlords will hand over the footage voluntarily,” Fox Cahn said. “That may sound like a minor detail, but it’s really stunning because it means that this is functionally equivalent to having the NYPD, having a camera system with facial recognition, in our own buildings in our homes.”

Local lawmakers have attempted to restrain the use of facial-recognition tools.

Last year, the City Council passed a law mandating corporate and commercial businesses disclose the use of facial recognition cameras — but those rules do not apply to residential buildings.

Rep. Ritchie Torres (D-The Bronx), who represents the neighborhood that includes Beekman, introduced the measure in 2019 as a Council member. He declined to comment for this story.

‘Used to Be Vietnam’

Inside buildings, souped-up camera systems substitute for a physical police presence, at a time when the NYPD has removed itself from the premises.

In September 2020, the Daily News reported, the NYPD quietly eliminated its Trespass Affidavit Program, also known as Operation Clean Halls, which had allowed police officers to confront loiterers inside private buildings whose owners had invited the cops in.

That program downshifted after civil liberties groups sued the NYPD and a federal court ruled in 2017 that police illegally stopped and frisked people inside private buildings.

In announcing the Clean Halls shutdown last year, the NYPD declared it was shifting to “smarter, more effective ways” to secure buildings — including surveillance cameras.

The owner of the Betty Shabazz Apartments in Bed Stuy, Brooklyn, struggling with loitering by outsiders, cited the end of the NYPD program as an obstacle to getting rid of trespassers.

Mott Haven locals say they recall a time of worse crime in their area and say they’re desperate not to go back. 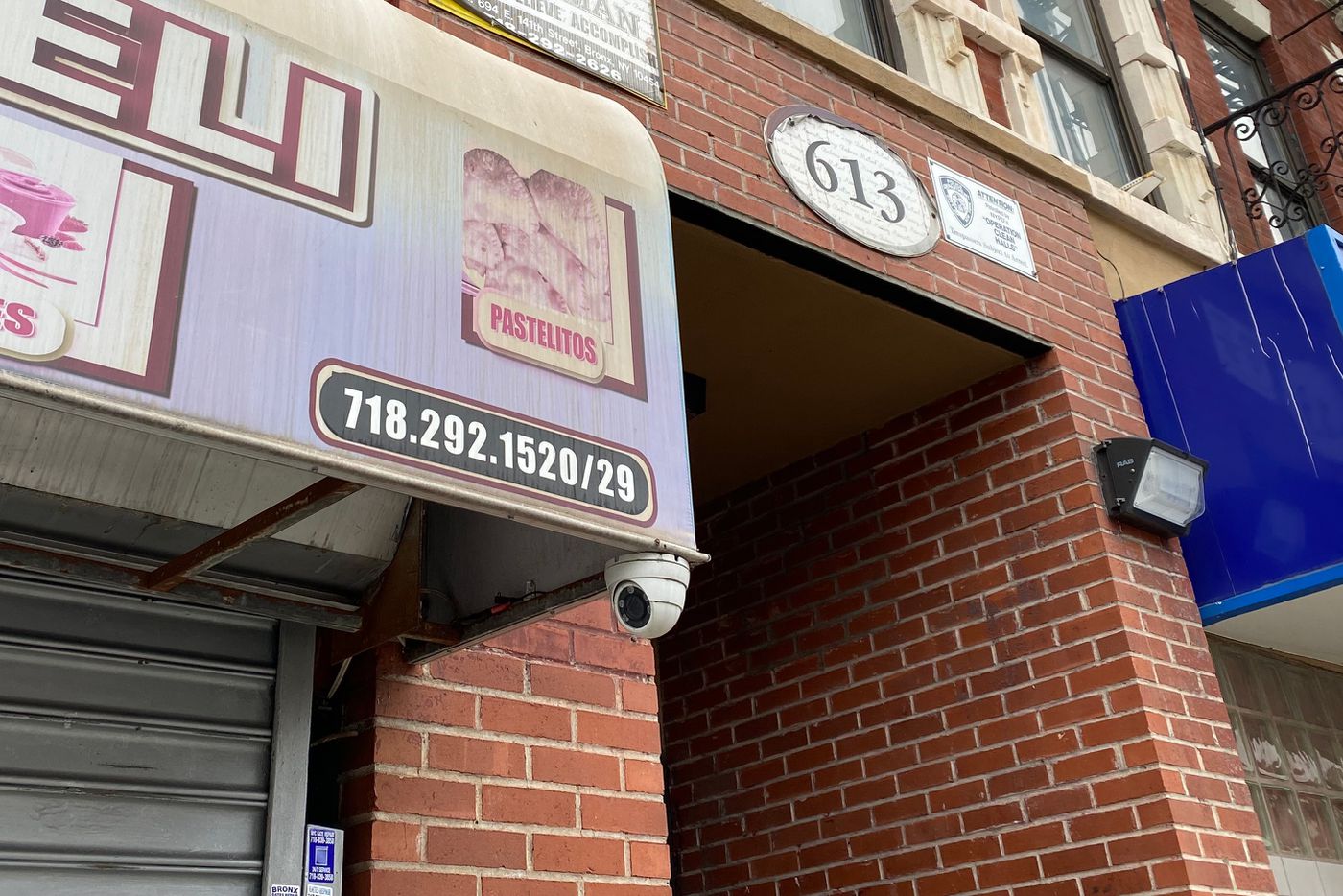 Ángel, a 63-year-old who’s lived in the neighborhood since he was a teenager, said of his block on 141st street and Cypress Ave.: “This used to be Vietnam. Shootings, fights over corners. This is a piece of cake for how it used to be.”

Ángel, who declined to give his last name, doesn’t live in the Diego Beekman buildings but says he’s just fine having the technology watching the area.

Some residents surveyed by THE CITY said they didn’t know the cameras had facial recognition capabilities.

A woman who lives in a Diego Beekman building on 141st Street and works at a bodega next door said she recalls giving management pictures of herself and all four of her children in exchange for the key fob. But she said she didn’t know the cameras scan and search their faces.

“That surprises me,” she said in Spanish. “I don’t remember them telling me about that.”

She doesn’t mind, she said.

The Powers Avenue resident who proudly displayed the key fob was taken aback by questions about the technology. “They don’t got my facial recognition,” he insisted.

Though he has a key fob, he said, management didn’t ask him for his picture.

“I don’t have a problem with it,” he said, switching between Spanish and English. “That’s good, because then you don’t have criminals here doing bad things, smoking weed, all that s—t.”

Would he provide his headshot if asked? “I would do it. Seguro que sí.”

AXIS: Insights & Inspiration From The World Of Cybersecurity

How to keep your home safe from burglars at Christmas