Everything You Need To Know About Coaxial Cable

In: All Posts, Basics
With: 0 Comments

What is Coaxial Cable? 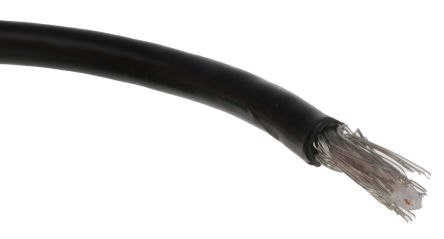 Coaxial cable, sometimes known as coax cable, is an electrical cable which transmits radio frequency (RF) signals from one point to another.

The technology has been around since the early 20th century, with these cables mainly being used to connect satellite antenna facilities to homes and businesses thanks to their durability and ease of installation.

What is RG cable?

There are different types of coaxial cable, which vary by gauge and impedance. Gauge refers to the cable’s thickness and is measured by the radio guide measurement or RG number. The higher the RG number, the thinner the central conductor core is.

Coaxial cable has a distinct thick, round shape because of its interior insulation layer. Its size makes it look very different to other types of cable, such as twisted pair or Ethernet cable. The most commons sizes of coaxial cable are RG-6, RG-11 and RG-59 – some of the size differences are demonstrated in the image below.

Coaxial cables are available in a variety of colours including black, brown and white.

How do Coaxial Cables work?

Coaxial cables are a popular choice because their shielded design allows the centre conductor to transmit data quickly while being protected from damage and interference.

Coaxial cables are mainly built up of these four different layers:

1.   A centre conductor which is usually a copper wire, which data and video travels through

2.   Surrounding the copper wire is a dielectric plastic insulator

3.   A braided mesh made from copper then helps to shield the cable from electromagnetic interference (EMI)

4.  The external layer is a plastic coating which protects the internal layers from damage

The first layer, called the dielectric, provides distance between the core conductor and the outer layers, as well as some insulation.

The next layers, collectively referred to as the shield, keep electrical impulses and radio transmissions out. The different layers of a coaxial cable are shown in the image below: What is the transmission speed of Coaxial Cable?

The transmission speed of coaxial cable is 10Mbps (megabits per second), and they offer 80 times more transmission capacity than twisted pair cables.

Another benefit of coaxial cable is the electromagnetic field carrying the signal exists only in the space between the inner and outer conductors. This means coaxial cable can be installed next to metal objects without losing power, unlike other types of transmission lines.

The main disadvantage of using coaxial cable is that single cable failure can take down an entire network.

Cables with 75 Ohm are mostly used for video signals, while 50 Ohm cables tend to be used for data and wireless communications.

In coaxial cables, Ohm refers to the impedance, which is the measure of resistance in the cable to the flow of electrical energy.

RF coaxial cables are used to carry radio frequency signals. They’re the standard input cable on TVs and feature a single pin which plugs into the RF input on a device.

RG-6 cables have larger conductors, so they provide better signal quality. They have thicker dielectric insulation and are made with a different kind of shielding, allowing them to handle GHz level signals more effectively. As this type of cable is thin, it can also be easily installed in walls or ceilings.

A common cable in domestic settings, RG-59 cable is similar to the RG-6, but it has an even thinner centre conductor. This makes it a good choice for short runs and low-frequency transmissions.

RG-11 cable is easily identifiable as it’s thicker than other types of coaxial cable, which can make it more difficult to work with. However, it offers a lower attenuation level than RG-6 or RG-59, meaning it can carry data for longer distances.

What are Coaxial Cables used for?

Here are some of the different uses for coaxial cable and which type is most suited for the task:

What is a coaxial splitter?

When coaxial cable lines are produced, they only provide one signal to power a singular device. This can be problematic if there’s more than one device which requires a signal.

Coaxial splitters are used when there’s more than one device which requires a signal. They’re small devices designed to attach to coaxial cable to split the signal into several lines to connect to multiple devices.

What is a coaxial port?

A coaxial port is a single female RCA connector. The port on a device is most likely to be labelled as ‘coaxial’, but could also be something such as ‘digital out’ or ‘digital in’. To help distinguish it, the coaxial port is usually colour-coded orange or black.

To help identify the different types of coaxial cable, here’s a size guide:

Coaxial cable connectors are used to connect cables to other devices and maintain the cable’s shielding.

Here are some of the most common coaxial connector types and their applications:

2021-02-23
Previous Post: What is a lens optical format? Can I use any machine vision camera with any format? NOT!
Next Post: Real Power, Reactive Power, Apparent Power and Power Factor

Record-breaking camera keeps everything between 3 cm and 1.7 km in focus

10 Signs of a Good Security Leader

What Does it Mean To Be FIPS Compliant?